Fueling Their 5-Stroke Engine: How to Win Lovers and Influence Co-workers 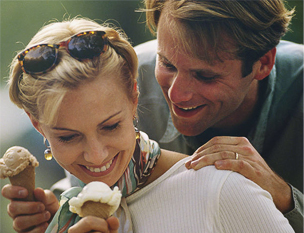 Cars have a four-stroke (or “four-cylinder”) engine, and lawn mowers have a two-stroke engine. But did you know that people have a five-stroke engine?

“It doesn’t feel like you love me when you hardly even appreciate me,” my wife told me. “I do some pretty amazing things, but to you they’re only worth a mildly enthusiastic acknowledgement.”

Huh? Just a few weeks earlier, on a whim I bought Erin a very thoughtful book that I knew she’d enjoy (and she did). Then on Valentine’s Day, I bought her Godiva chocolates (doesn’t that spell “love” to every woman?). And a short while later, I brought her flowers. How could she not feel loved?

The problem was that I was focusing on only one of the five strokes (Gifts), and it happened to be the stroke that is the least meaningful for Erin.

After many years of marriage counseling, Dr. Gary Chapman noticed a pattern: everyone he had ever counseled had what he calls a “love language,” a primary way of expressing and interpreting love. In The 5 Love Languages (which has sold five million copies), Dr. Chapman says that of the countless ways we can show love (or approval), five categories proved to be universal — everyone has a love language, and we all identify primarily with one of the five love languages.

I like to think in terms of a five-stroke engine that needs to be fueled, because it’s not just about love. Psychologist Kevin Leman says the five also apply to approval and respect — how you communicate approval and respect to others, and how you interpret how others are treating you.

To understand and remember all five strokes, I refer to the “cliff notes” versions rather than an entire book — there is a concise and enjoyable chapter on this topic in Dr. Leman’s book Have a New You by Friday, or a similar chapter in Andy Andrews’ book The Noticer. Both authors make them easier to remember because they associate each with a pet animal:

Understanding the stroke that is most meaningful to the people you care about is not a secret formula to their heart (my wife is, after all, a complex creature — and anyway, she would rather feel pursued than have a formula applied to her). But it can help avoid frustration and misunderstanding, because you can show that you care in ways that are meaningful to them; and you can help them understand which stroke shows you they care for you, too.

Understanding these five strokes can also help you connect better with your kids and meet their need for love and approval. And it can even help you influence and inspire — or at least get along with — your co-workers. “Empathy is an important first step in trying to understand those around us,” said author Craig Morgan, “a step that will help us communicate and interact in a more productive and rewarding manner with the people in our lives.”

Think of one or two of the most significant people in your life. How can you best rev up their 5-stroke engine?