How Gamification Changes the Engagement Game

Recently I was asked how gamification fits with other engagement strategies, or whether it replaces them altogether. The answer reveals a major reason why gamification is a game changer.

I define gamification as game-inspired tactics to engage people. Traditionally, corporate communication experts have viewed the process of engaging a target audience as a progression from awareness through action. 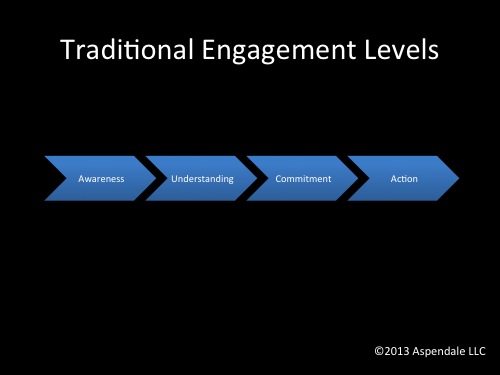 For example, if an employer launches a wellness program with the objective of educating and motivating their employees to eat healthier and get more exercise, the traditional approach is to…

Over time, other tactics may be added to develop the engagement level of employees so they… 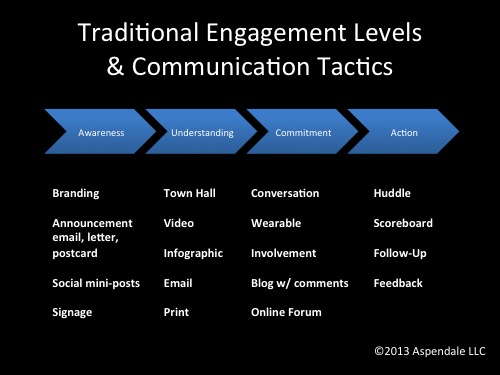 (This diagram is simplified for the purpose of illustration. For example, in actual practice, various tactics such as social media are used at multiple levels. An actual communication plan should be custom-developed based on the organization’s goals and circumstances.)

Some engagement efforts are particularly challenging because success only occurs when the audience’s action becomes a permanent habit. With wellness programs, for example, despite ongoing reinforcement communication and coaching, the long-term participation rate at most companies is low and health-risk factors such as obesity remain high.

Well-designed gamification offers the potential to break through that challenge not only as an additional tactic to encourage progression through the engagement levels, but by completely changing the engagement levels themselves. I realized this when Wharton professor Kevin Werbach pointed out what happens when a person plays a video game like Plants vs. Zombies for the first time.

Does Gamification Replace Other Engagement Strategies?

That depends on the scope of the program. For a relatively small scope, such as getting employees to complete their expense reports on a timely basis, early data shared by software providers such as Badgeville shows that gamification alone seems to make a significant difference. For a larger scope such as wellness, additional tactics probably increase the percentage of employees who progress to each higher level. And if the scope is quite complex, such as a business transformation or any change that affects the employer-employee relationship, it’s crucial to have a broader strategy that makes a clear, human connection between employees and their leaders about why the change is necessary, where the team is headed, and so on.
Still, gamification can be useful at every engagement level. For example, if a game is really fun to play, awareness will spread by word of mouth especially if integrated with social media such as Facebook or Yammer. For that reason, rather than tacking gamification on to one of the levels as an additional tactic (in the chart below), it is represented by a big, green G as a tactic to consider at every level. 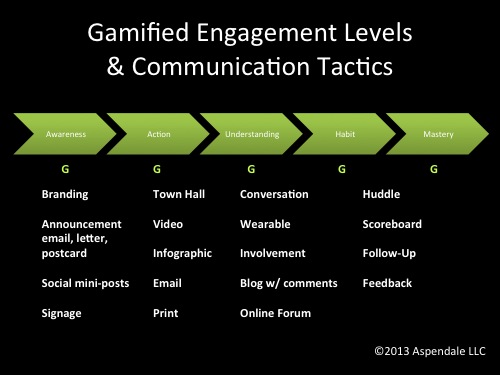