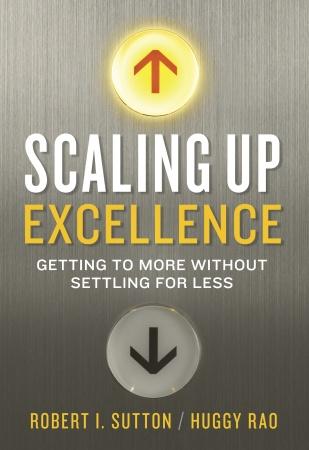 If you’ve created a great little coffeeshop, how do you expand and put your coffeeshops in cities around the world without watering down what makes your coffeeshop great? That’s a question that Starbucks certainly struggled to answer.

Or, if you have a key practice or mindset — for example, lean manufacturing — how do you spread it throughout your organization?

It’s a question of scaling up … taking a pocket of excellence and expanding it. But it’s really hard. There are countless examples of organizations who try to scale up but end up just spreading mediocrity — or worse, their efforts to expand actually ruin the organization.

Bob Sutton and Huggy Rao, researchers and professors from Stanford University, spent seven years studying this question. And now they’re sharing their findings in their new book Scaling Up Excellence: Getting To More Without Settling For Less.

This is quite different from many business books available.

It’s not a short, light, easy read — it’s about twice as long as many business bestsellers. However, it’s well-written and fun to read, with plenty of real-life stories and details that kept me turning the pages.

Nor does it try to distill the research findings into a simple recipe or defined set of principles. Bob and Huggy’s research showed that scaling up is a complex issue; and so in their book, they wanted to avoid giving the impression that a simple recipe like “5 steps to scaling” would guarantee success. There aren’t tips that will work in every situation. Instead, the book provides themes, principles, and examples, so you can think about which specific things will work for your organization.

Even the seven “scaling mantras” mentioned in many Amazon reviews don’t capture the book’s truths … I think that was intended as simply an exercise to shape your mindset as you started the book.

Here are some of my favorite take-aways from Scaling Up Excellence:

Many of the case studies in the book are helpful, especially due to the up-close-and-personal level of details that Bob and Huggy share. My favorite case study, because it was such a huge internal effort and exemplifies so many of the book’s lessons, is the Kaiser Permanente (KP) story. At first glance, it was simply the implementation of an electronic health record system called KP HealthConnect. But perhaps it was because the situation seemed too simple that KP endured a decade of failed implementation attempts. The successful implementation, finally completed in 2010, required a massive shift in mindset from a hospital-as-hub model of health care, to a home-as-hub model of health care.

If you want a quick roadmap to follow (which may or may not actually work), go read a different book. If you want thoughtful insights into a complex issue, with proven ideas to consider for your organization, and meaningful litmus tests to determine whether you’re on the right track at any point in time (before it’s too late), this is the book for you.

Jesse is the host of the Engaging Leader and Game Changer podcasts and managing principal of Aspendale Communications. Connect with him on Twitter, Facebook, or LinkedIn.